After spending the last year playing huge festivals such as Reading & Leeds, and supporting Jake Bugg on his acoustic tour, Adam French’s beautiful lyrically lead tracks have us craving the release of his first album.

His most recent EP, Weightless, explores factors like love with somewhat deep lyrics relating mainly to his personal relationships. Adam’s voice echoes through Manchester’s Deaf Institute as he plays a variation of tracks from Weightless and his previous, more optimistic EP, Face to Face. 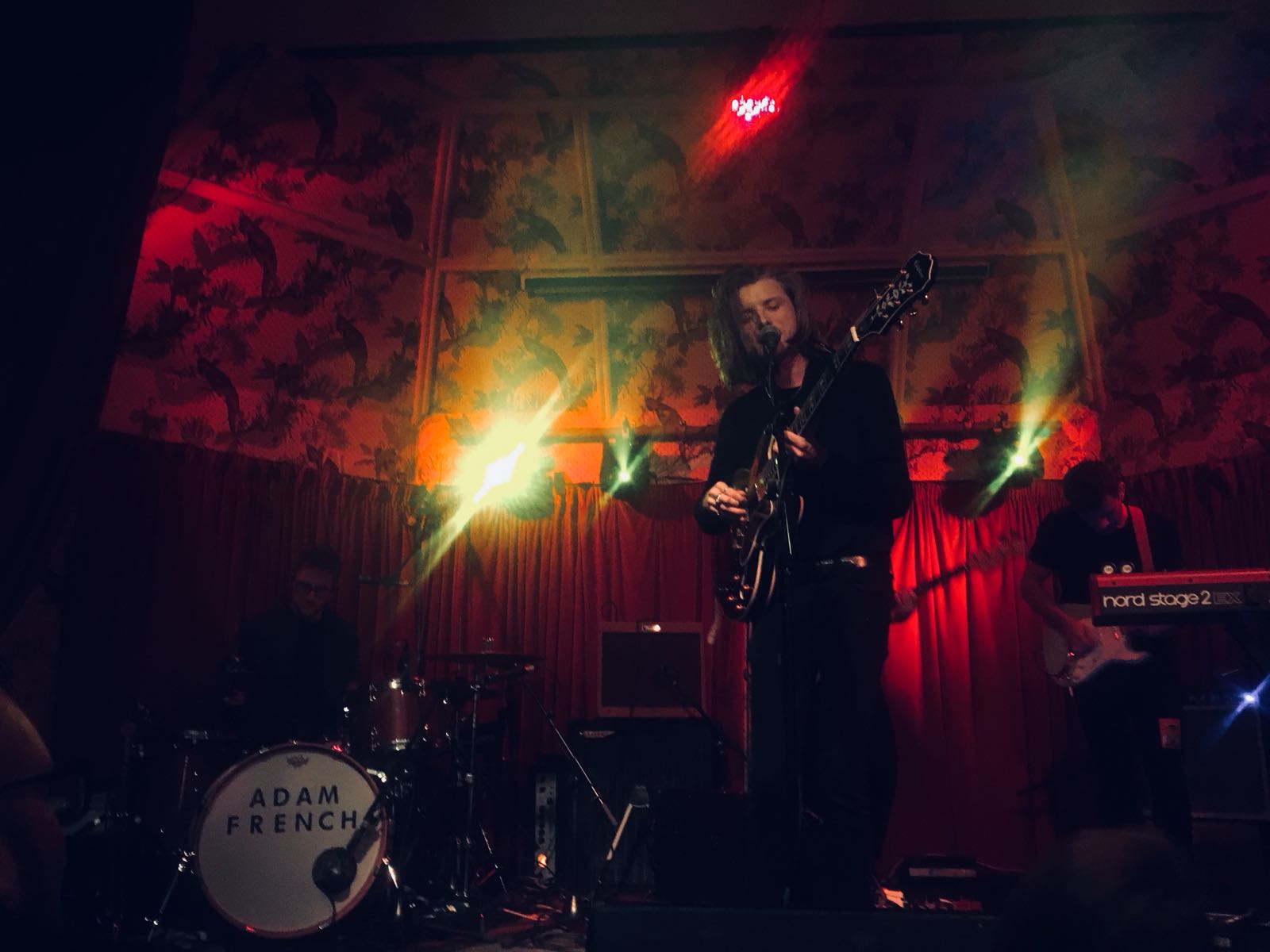 Tracks include My Addiction, Skin Deep, Ivory and More To Life. He also includes a favourite of his from 2009, a cover of The Rat by the Walkmen, which he puts his own stamp on by stripping it right back with just him and his guitar.

At just 23 years of age, Adam’s talent is impeccable. His voice is perfect recording material and his raw, humble honesty within his music beams through his live performance, creating something exceptionally beautiful.

Your lyrics feel so sincere and are really relatable. Do you find it easy to write them?

Yeah I think that’s the easiest way to write – to be honest. If you’re preaching about what you already know then people are gonna believe what you’re saying. I’ve always found it easier to talk about things that are personal via a little notebook rather than discussing it with mates.

Where is your favourite place to write?

It started out in my bedroom back home and now my flat in London is basically a demo studio, so my lounge is my little safe haven for writing my music. I’d rather that than be in a studio – I’ve always felt more comfortable writing at home.

Your Weightless EP, which we love, was released at the end of last year. When can we expect an album?

I’m not so sure how long it will be for the album. It’s all recorded so we’re ready to go with it, but it just makes sense to release it when we’ve earned the right to do it.  We should be releasing more music in March at some point!

How would you describe your sound?

I guess it’s a pretty wide range and definitely lyrically lead. So as we said before, lyrics mean a lot and it’s important to get them right and then everything falls around that. The Weightless EP is definitely a lot more stripped back and relates more to the music I listen to.

Does it take a long time to develop as an artist, trying to create your own identity?

I guess it’s a gradual thing to find your feet. I’ve spent the past couple of years figuring out what I enjoy writing and performing whilst also taking into consideration what fans prefer.  I’m where I want to be now, which is good. I don’t turn off at night but I think if you fully love something then you don’t really want to!

We’ve noticed your Spotify playlist is a big variation of different musicians – who would you say inspires you?

Loads of people! Anything from Nirvana to Bon Iver, Elton John, Johnny Cash, Burial. Production wise, I love listening to them and picking out different things that I like depending on my mood.  My background is through bands in Manchester and Stoke, which is why there are a lot of bands on my playlist – I loved bands as a teenager and I still love them now.

Please would you tell us the story behind the orange tree in all of your artwork?

There’s a window just to the left of where I sit to write and that window frames an orange tree.  I’ll write my lyrics sat at my desk and there’s just something about the way it looks – it’s vibrant which I like. I thought I’d bring it into the artwork and make it relevant and it just worked!

What age did you pick up a guitar?

I was about 8 years old. I was a bit on and off with it as a teenager so I fluttered around trying to decide if I wanted to play and then from age 15 I carried on with it and loved it – I didn’t put it down again! I play piano, drums and bass too but playing guitar is my favourite.

What made you want to record a cover of The Rat by The Walkmen? Is that a special song to you?

Yeah – going back to growing up and being into bands, we’d play shows in the North West and every time we played a gig the indie DJ would play that song. The vocal delivery is so energetic and it makes you feel something – a lot more than other bands at that time.

We saw a sneaky preview on social media of your cover of Arctic Monkeys – can we expect a live cover of R U Mine at any point on the tour?

It depends how drunk everybody is on the night! I love the whole AM album. Alex Turner is an incredible performer and a very talented chap. I’ll definitely try to catch them this year.

Yeah that was massive! I hadn’t played a gig for at least 6 months before those shows and they were with my band so you have that support there. It went from that, to stepping out on the first night in Stoke in front of around 2200 people and it was incredible. A little bit of a shit yourself moment I’m not gonna lie – but incredible. Hopefully we’ll have crowds of our own at that size at some point!